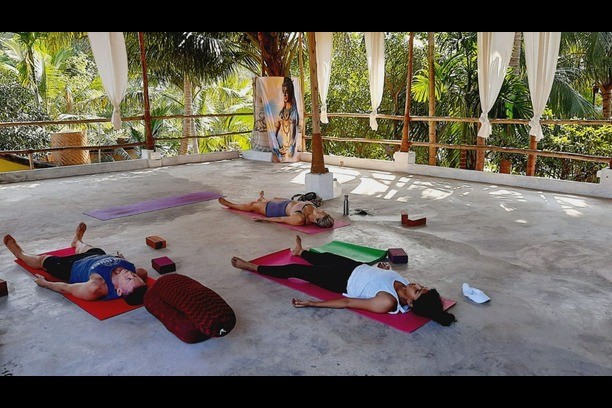 Vinyasa yoga is a popular form of yoga that strings together various postures where one posture seamlessly eases into the next posture by employing breath, entailing a flowing movement. This flow yoga widely practiced in Western countries can be likened to a cardio workout as it helps increase your heart rate while you break out into a sweat. As a yoga practitioner, although you do not intend to delve into Vinyasa yoga practice, the concept, origins and benefits of this flow yoga are vital to understanding as an avid yoga follower.

Definition of Vinyasa in yoga

During Hatha yoga, your physical movements work in tandem with your breath. This is called Vinyasa. The Vinyasa technique helps to perform yoga with a deeper awareness through rhythmic bodily movements in sync with the breath. Literally speaking, Vinyasa is a Sanskrit word where ‘Vi’ denotes “in a special way” while the remaining part “nyasa” can be translated as “within laid down parameters”.

Thus the term “Vinyasa” can be translated as organizing some things in a specific manner within certain specific structures. These Hatha yoga-specific structures are actually the inhalation and exhalation of breath while the order or sequence of yoga poses is the specific arrangements of things. For instance, sun salutations are a typical Hatha yoga Vinyasa sequence while any permutation and combination of sun salutation sequences form the basis of a Vinyasa flow class.

Ashtanga yoga Mysore was the original form of Vinyasa yoga. Besides, other styles of yoga such as Power yoga, Viniyoga, Jivamukti and others use some style of this dynamic flow yoga. Although Vinyasa yoga can be practiced by anyone, it’s best perfected by those with some yoga experience. Depending on the specific style and yoga instructor taking up a flow yoga class, the tempo and temperature can vary.

If you are keen to undergo yoga teacher training in Vinyasa form, particularly in Goa, then the 200 Hour Vinyasa Yoga TTC Goa course would be your best bet.

Vinyasa in yoga is typically used to link movement during poses to the rhythmic inhale-exhale of breath. Hence, the Vinyasa style is predominantly used where the primary focus is on flowing movements in tandem with breath.

Vinyasa helps you to get in and get out of a yoga posture by connecting with breathing patterns. When you inhale, it naturally begets the expansion of the ribs and belly. This along with the right alignment and adjustment of postures will help expand through lengthening the spine. Similarly, an exhalation tends to contract the torso and the gut area while encouraging retraction. In yoga, as a general rule, an inhalation is associated with getting into a posture and moving against the earth’s gravity. Besides, as you inhale, you tend to form upward movements or your spine may arch.

On the contrary, while moving out of a pose, you tend to exhale and move along with gravity. Similarly, you exhale while moving down in a posture or while rounding your spine.

The Vinyasa form is most utilized while warming up for ensuing yoga exercise and especially for performing the Suryanamaskar or sun salutation sequence. There are some forms of yoga that extensively utilize Vinyasa throughout the span of the practice. However, sometimes things like appropriate alignment and adjustment are sacrificed in favor of the flowing movements during practice. However, with time and regular practice, one can gain mastery and develop strength in Vinyasa yoga practice.

Using Vinyasa in breathwork or Pranayam

Breathing forms an important part of the Vinyasa form. Ujjayi pranayama or ocean breath best supports Vinyasa movements. The Ujjayi breathing method gradually slows down the breath rate while enhancing mental concentration. Plus, this pranayama technique warms and revitalizes the body. A Vinyasa class lays a lot of emphasis on your breathing quality. When you are distracted in a Vinyasa class, your breath also tends to become short, jaggy and inhibited. Take these as a cue to slow down and take a break.

Amongst the many styles of Vinyasa form, Ashtanga yoga is probably the only yoga style that abides by set rules and a strict structure of sequenced series. The Ashtanga yoga Mysore was developed and promoted by Sri K. Pattabhi Jois. This renowned Guru was once a disciple of Krishnamacharya who is credited with formulating the original Vinyasa yoga concept. However, Krishnamacharya adopted a more versatile form of Vinyasa which constantly changed depending on the individual personalities of his followers. But, the yoga that Jois learned from Krishnamacharya was laid upon certain specific rules and structure and later came to be known as Ashtanga Mysore style yoga

Krishnamacharya employed vinyasa in two different variations. One way dealt with creating a stepped sequence of poses built upon knowledge and cues for approaching a specific yoga posture. The other way used Vinyasa to comprehend the stage or pose variation from a beginner to performing an advanced pose. On the contrary, Pattabhi Jois utilized the vinyasa form in the repetitive mode with the aim of linking movements between the yoga asanas in a prescribed sequence.

Since Vinyasa focuses on the synchronization of bodily movements with breath, initially you will find balancing postures with breath a bit daunting. However, as you persistently and regularly maintain a yoga routine, you will eventually find a rhythm that works for you. Also, this can eventually help you achieve a much deeper focus and awareness. Also, keep in mind that if you are finding it difficult to maintain a breath rhythm in tandem with the body movements, you can either choose to add a few more breaths or slow down and even do away with some movements simply to keep up with the rhythm of the class.

Give yourself space to go with the flow of the class instead of delving into certain postures and other details of a Vinyasa flow class. However, make sure that you do not negate the importance of proper alignment in order to move quickly through a Vinyasa flow sequence. If you are still not able to align poses, then comparatively slower and alignment-centred yoga classes would serve you well.

If you happen to travel to Goa, then do check out some yoga shalas in the coastal state. Some of the best Vinyasa yoga courses in Goa take into account all these tips while encouraging you to achieve perfection in Vinyasa flow yoga.

Vinyasa yoga is a conceptual form of yoga that is applied to various styles of traditional as well as contemporary styles of yoga. However, whichever form you choose, your body should nevertheless move in tandem with breath to bring about a deeper awareness of self.

At Goa Yogashala, we believe that yoga is not only about a fitness routine. It is the perfect medium of finding a complete harmony between your mind, body, and soul. Here, we focus on all aspects of yoga – physical, mental, as well as spiritual.